The Interdisciplinary Media Artist’s Association/Population of Noise (IMAPON) invites you to visit the public art exhibition S.P.A.C.E. 2021 - Spirits, People, Animals, Creatures, Echoes at McBride Park, Kitsilano June 1 through October 31, 2021.  There are Thirteen banners total in the exhibition, featuring works of community, emerging and senior artists.. Many of the banners provide interactive elements via QR Codes, where sound, video experiences can be accessed. Also on display are two art banners of photographs from the S.P.A.C.E. Gallery submission project of 2020, which were juried and chosen specifically for the outdoor exhibition component. IMAPON are artists-in-residence at McBride Park as part of Vancouver Park Board's Fieldhouse Activations. Funded by City of Vancouver Community Arts Development Grant and Vancouver Park Board with support from Village Vancouver and Vancouver Park Board.

​CURATOR'S STATEMENT:  Artists, in partnership with landscape and public natural space, are becoming the arbiters, mediators and votaries for intimate and sensitive forms of socially engaged public art. Motivated by the fact we have now become so interwoven with and changed by our digital devices and technologies; that attempting to reconnect to the natural realm by way of these technologies seems to be a logical approach. Landscape and nature photography is nothing new in exhibition, however; Covid lockdown blues is unfamiliar. As people were restricted from gathering, I soon noticed a trend that many people were going out for individual and family walks more than usual and photographing their experiences.  IMAPON began showing some of these works on our Co-Vid-EO page.  Also, I saw many Facebook postings from people who normally didn’t post pictures of animals, birds, landscapes, or cityscapes. Many of the photos were taken using handheld phones and devices. To recognize this community expression using these ubiquitous devices; I envisioned S.P.A.C.E. to be a theme to present these expressions of Art + Technology + Nature. 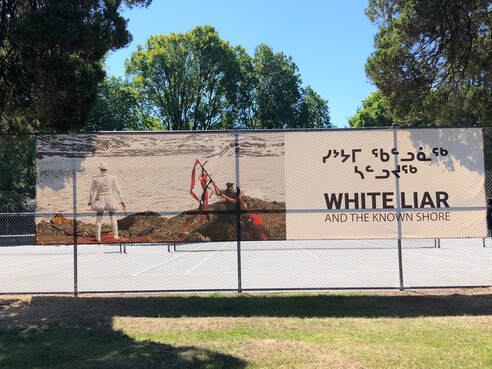 Featured artists Jamie Griffiths and Laakkuluk Williamson Bathory both based in Iqaluit, Nunavut present White Liar and the Known Shore: Frobisher and the Queen (2021).   This work brings together many aspects of the colonial story of Iqaluit. The photograph is taken on the northern shore of Niaqunnguup Kangiqtunga, an inlet to ‘Frobisher Bay.’ The late spring sea ice is seen in a state of decay, melting a month earlier than usual.

We acknowledge that this work is on unceded traditional territories of the Coast Salish peoples of the xʷməθkwəy̓əm (Musqueam), Skwxwú7mesh (Squamish), and Səl̓ílwətaɬ (Tsleil-Waututh) Nations. 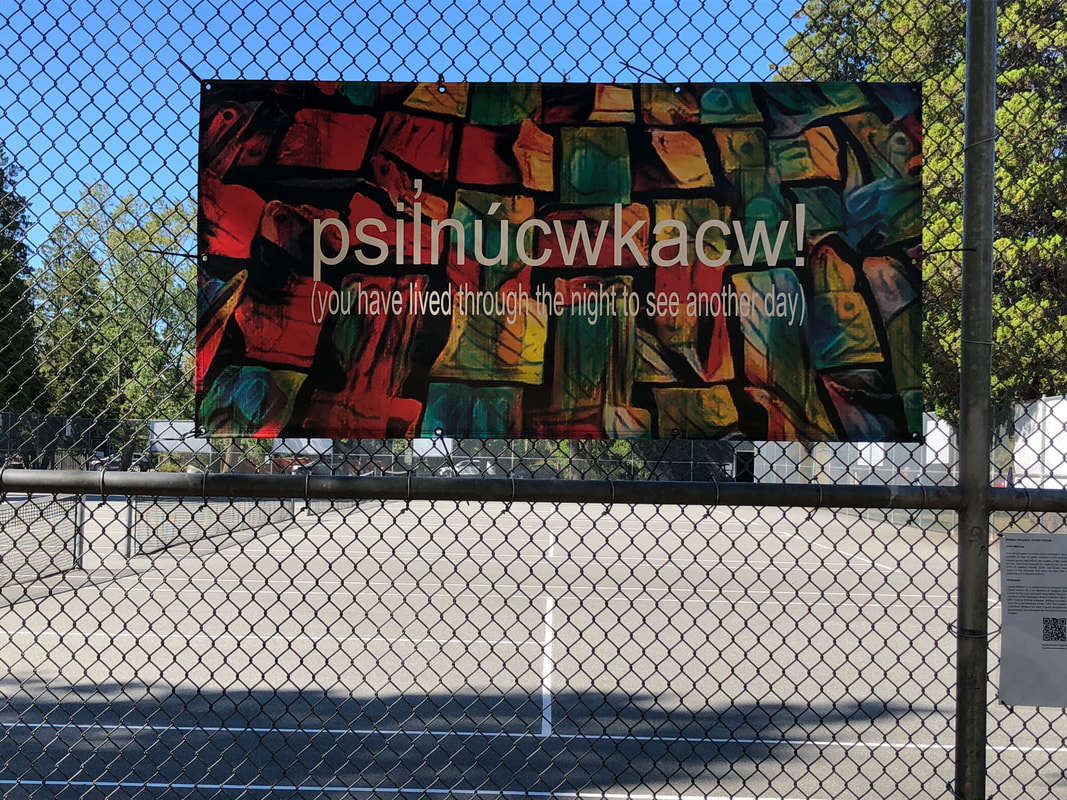 Russell Wallace is an award-winning composer and a traditional singer from the Lil’wat Nation. He is an alumnus of Capilano University, University of BC, Banff Centre for the Arts, and Spirit Song Native Theatre. Wallace is one of the founding members of the Aboriginal Writers Collective West Coast and is an alumnus of the UBC Creative Writing program. Wallace received a Leo Award for Best Musical Score for a documentary series, “1491: The Untold History of the Americas Before Columbus”.

How do you greet someone in the morning? In the Stʼatʼimc language there are a number of ways to greet someone in the morning. I chose one greeting that sounds poetic and reflects the realities of life. “psil̓núcwkacw!” roughly translates to “you have lived through the night to see another day”. This phrase fits in the S.P.A.C.E. gallery’s People, Spirits, and Echoes aspect. As people we live in this realm of the everyday and when we leave this realm we become spirits and memories of us become echoes.


The image was created from research [phylum] are currently undertaking on a hybrid biological-technological installation called Beauty featuring a bio-driven artificial intelligence system that remediates a contaminated soil ecology while generating an audio-visual composition in real-time. The work creates a situation where the fates of the contaminated soil and a group of bacterial cultures are determined by the whims of an AI that has an internal model of “beauty”. This AI builds its model by observing the cooperative pattern-forming and swarming behaviours of numerous bacterial species. Growth patterns, colours and spatial dynamics will be analyzed by the AI to determine how well the colonies conform to its internal model of beauty. 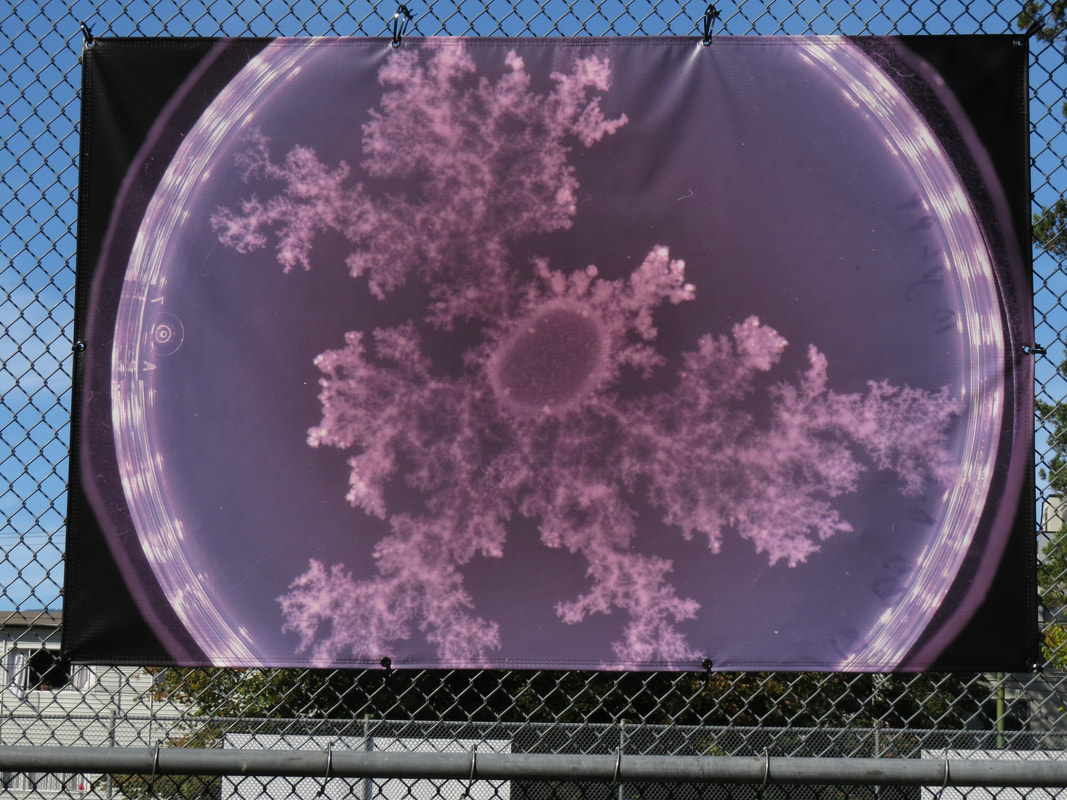 PERSONA - SUSI MILNE
The work for PERSONA is drawn from what is occurring in an ordinary and sometimes mundane manner. This work, multi layered in the representation reflects a sense of cultural change brought on by the Covid 19 World Pandemic. Specifically, PERSONA chronicles the wearing of masks witnessed in the public sphere of Vancouver, British Columbia.

The images are of everyday people that Susi has observed during the first year of the Pandemic.  Awkward social distancing, irregular masking, and a general malaise occupied the moods of the people as we moved through our lives with the new health restrictions.  We learned to smile more with our eyes.  I celebrate that warm, ethereal connection with bright colours and classic line. 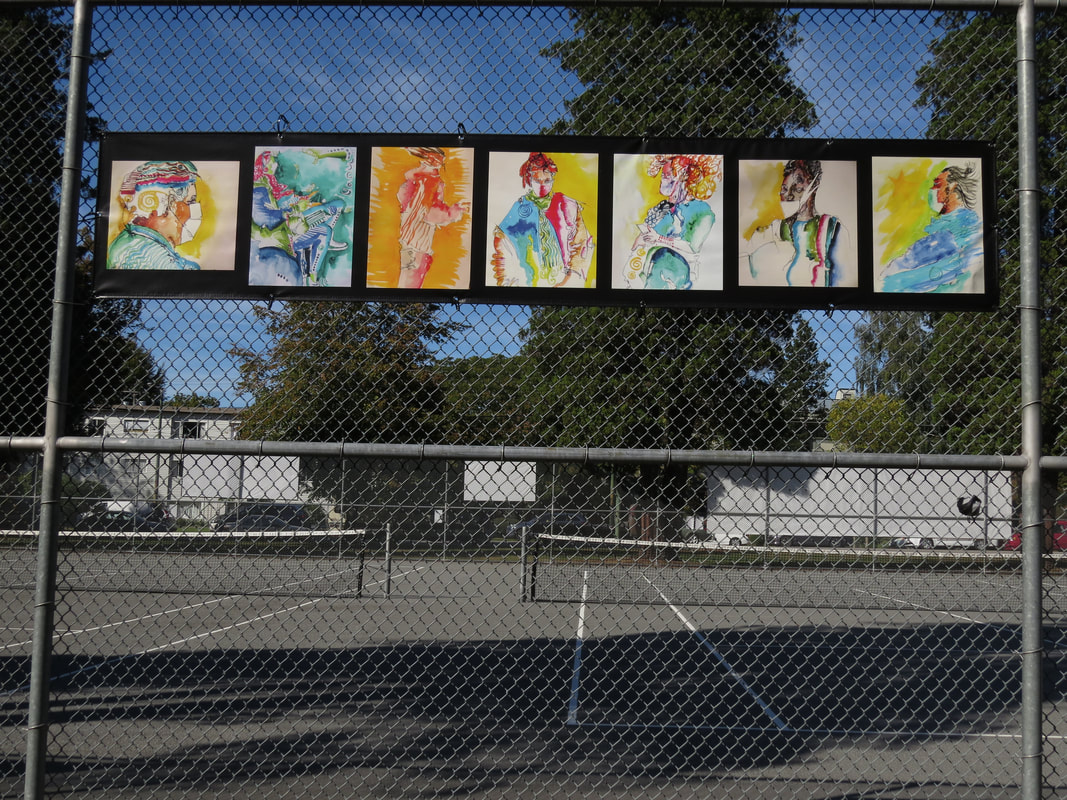 THE WALK TO WORK AND BACK HOME AGAIN: 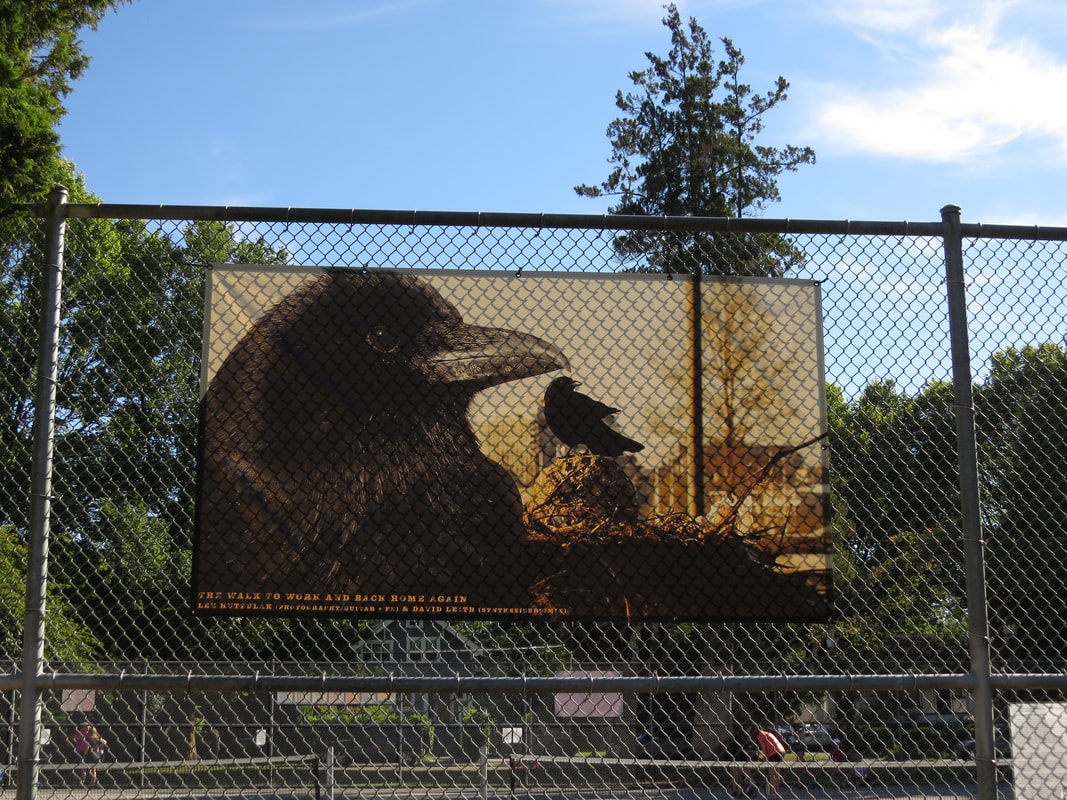 The Walk To Work and Back Home Again is an ongoing project by Lee Hutzulak that incorporates photography and narrated video. This project began as a way to connect with a loved one living overseas, by sharing images of urban wildlife and the ever-evolving landscape in Vancouver, British Columbia. In the Spring of 2021, after years of commuting to work on bicycle, Lee decided to reimagine this small but regular routine. He began walking to work with a camera, exploring new routes and revisiting spots undergoing transformation. The development of the new St. Paul’s Hospital is one of these places, and where the video of the crow was filmed. The bare field is now an active construction site, changing daily. Dave Leith's audio creates a new narrative playing on the crow's interaction with the changing environment. Composed using layers of granulated and time-stretched audio from the original footage, Dave also incorporated electronics, field recordings, and Lee's guitar. On-site there is a QR Code to use for experiencing the sound track associated with this work.

David Leith is a multi-disciplinary artist. He has an extensive background in media, sound art, music recording and performing. His work has been exhibited and published internationally for over 40 years.

Leith taught at the Vancouver Film School for over twenty years. He recently retired from teaching. Leith was artist in residence for the 2008 VIVO SLAB workshop. He taught students to build their own theremins and create interactive installations. In Winnipeg he received a Manitoba Arts Council 'Artists in the Schools' grant to teach pinhole photography.

MERLYN CHIPMAN :  UNTITLED
​
This untitled work is a single frame of video feedback captured in 1/15th of a second, made with 1980s video hardware and MetaMirrors software developed by Rob Scharein and Merlyn Chipman.  This particular moment in time was chosen for the theme “Echo”.  The unseen video frames that precede and follow it are slight permutations or “visual echos” moving through time.  The repeating nature of this feedback process can be seen in the two square mandalas repeating in a checkerboard pattern 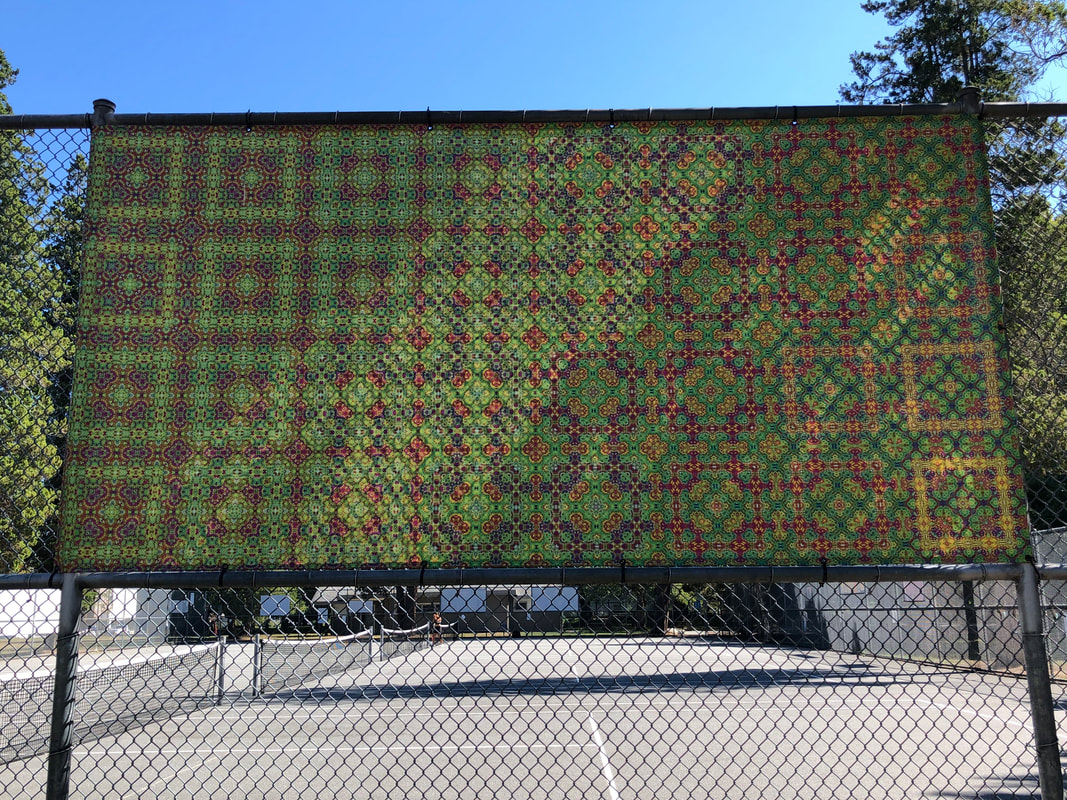 Merlyn Chipman's artwork spans live improvisational audio/video, print and installation art but he identifies himself as a "Feedback Artist."  First encountering “video feedback” in 1998 by accidently pointing a video camera at a television set Merlyn quickly reoriented his entire life around his discovery of this medium.  His work exemplifies a relationship with video technology that is primal and abstract, absent of visual or verbal representation.  Merlyn currently works in audio visual production and film.  He has studied psychology at SFU, broadcasting at BCIT and holds a diploma of interaction design from Capilano University. Merlyn has performed live internationally with musicians like Mark Hosler from Negativeland, Eternal Tapestry, Jeremy Inkel from Frontline Assembly and with Japanese Noise artist, Merzbow. Merlyn is a current member of Redgate Arts Society and Loco Moto Art.  He is currently an artists-in-residence with the Vancouver Park Board’s Arts, Culture and Engagement studio programme. 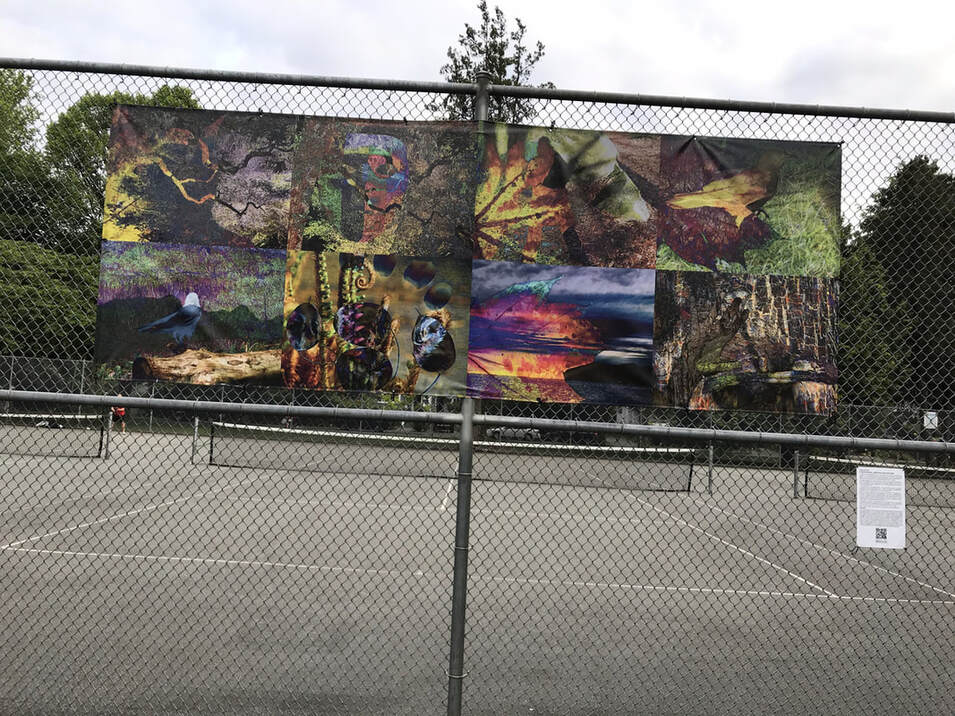 This work is created from photographs taken over a period of several years during an artist-residency with the City of Vancouver Parks Board. The images depict in situ events as well as in-studio photography of the natural plant life collected during nature walks, such as fall leaves, twigs, shells and rocks.
The digital collages assembled here were created via the proprietary software R-Combo, developed by Dr. Rob Scharein. The image collages chosen are visual storytelling that conveys the artist's feelings of the sense of being interconnected with and in the natural world.

ROB SCHAREIN
SYMMETRIC ENERGIES
​These intricate designs are based on engravings done by Leonardo da Vinci. Using his proprietary software KnotPlot, Scharein painstakingly traced the interlacing and realized the knot mandalas in three dimensions. This allows one to virtually fly through the designs or to cut them into pieces and have them untangle themselves. Glowing with their own self-illumination, they become objects of peaceful contemplation. Question for the viewer: how many individual strands are in each of the knot mandalas? Banner at McBride Park (interactive) and one video. These knot mandalas were the fruit of a collaboration with author Caroline Cocciardi and variations of the renderings were used as illustrations for her book Leonardo’s Knots.
knotplot.com
leonardosknots.com
​​

.Rob Scharein is an ex-astrophysicist, mathematician and artist who is keenly interested in the interplay between Science, Art, and Mathematics. He is a developer of high-performance graphics software that draws from the beauty of Nature to create engaging interactive art pieces. Rob holds a Ph.D. in Computer Science from the University of British Columbia. His art practice interests include computer generative, gesture control and interactive installations, including 3D Virtual and Augmented Reality environments. Rob has collaborated with the artists Jamie Griffiths, Laura Lee Coles, Merlyn Chipman and Dave Leith, also presenting here. 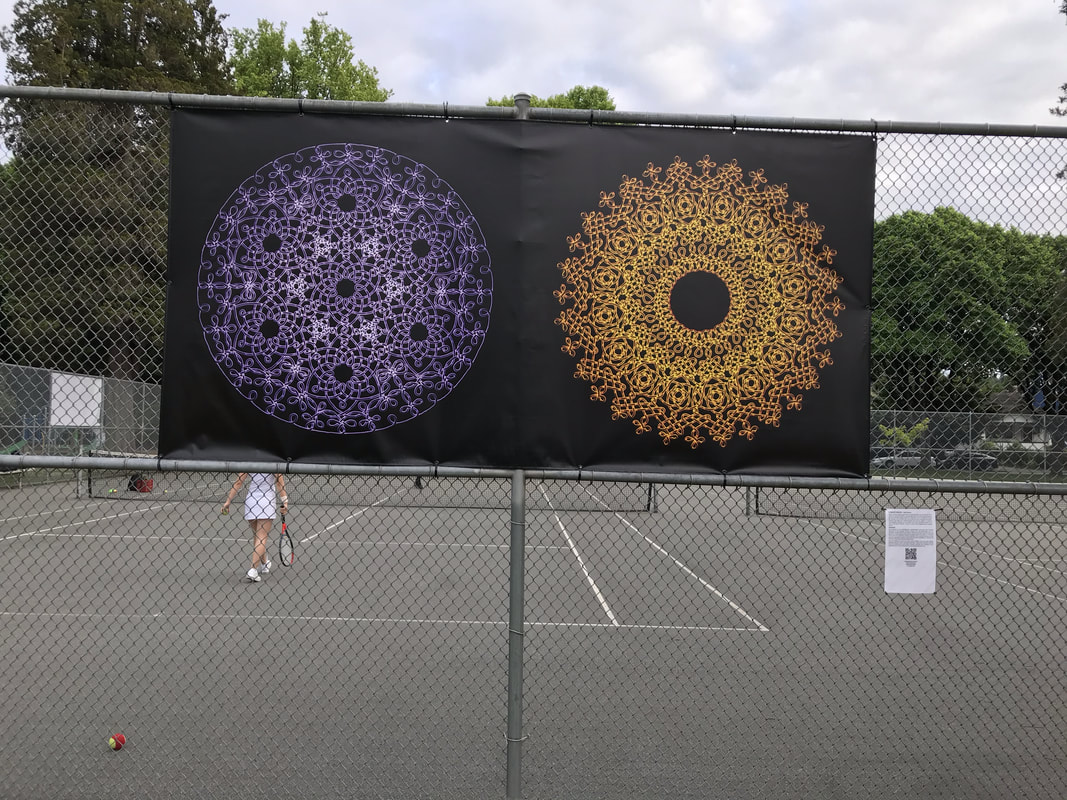 The images in “Walking with Kindred Spirits” mark a moment of personal loss and transformation. The photos were taken as documentation of a performative exploration of grief. They capture a dance piece “Two”, that was created in response to the death of artist Terry Haines, my kindred spirit.  Eight years later, I can experience these images with a new perspective. They celebrate a love, a companionship and a partnership. I chose these images to relate the strength and importance of the many bonds and kinships that we as humans are privileged to share. This new piece seeks to acknowledge the spirits, beings and ancestors, seen and unseen that walk the worlds with us. 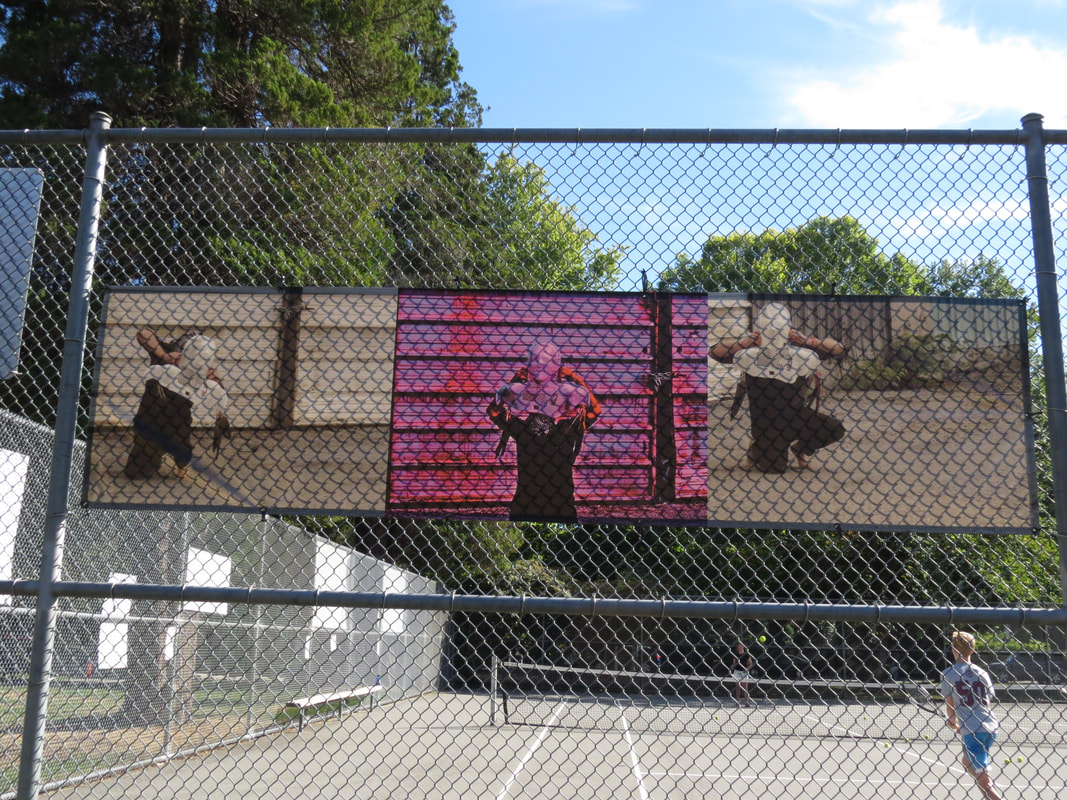 TIERRA AIRINIOS: EMERGING ARTIST - HAWAII
​RENEWAL
​Tierra finds inspiration for her painting from a variety of places: dreams, the natural landscape, and the visualization of atmosphere, of spirit. "I like to interpret my feelings and emotional senses and often draw upon them.  I paint when I’m happy, when I’m angry, when I’m sad, and this emotional honesty guides my hand. My work at this point is about self-introspection and my place in this world. Being creative gives me a sense of peace and freedom." 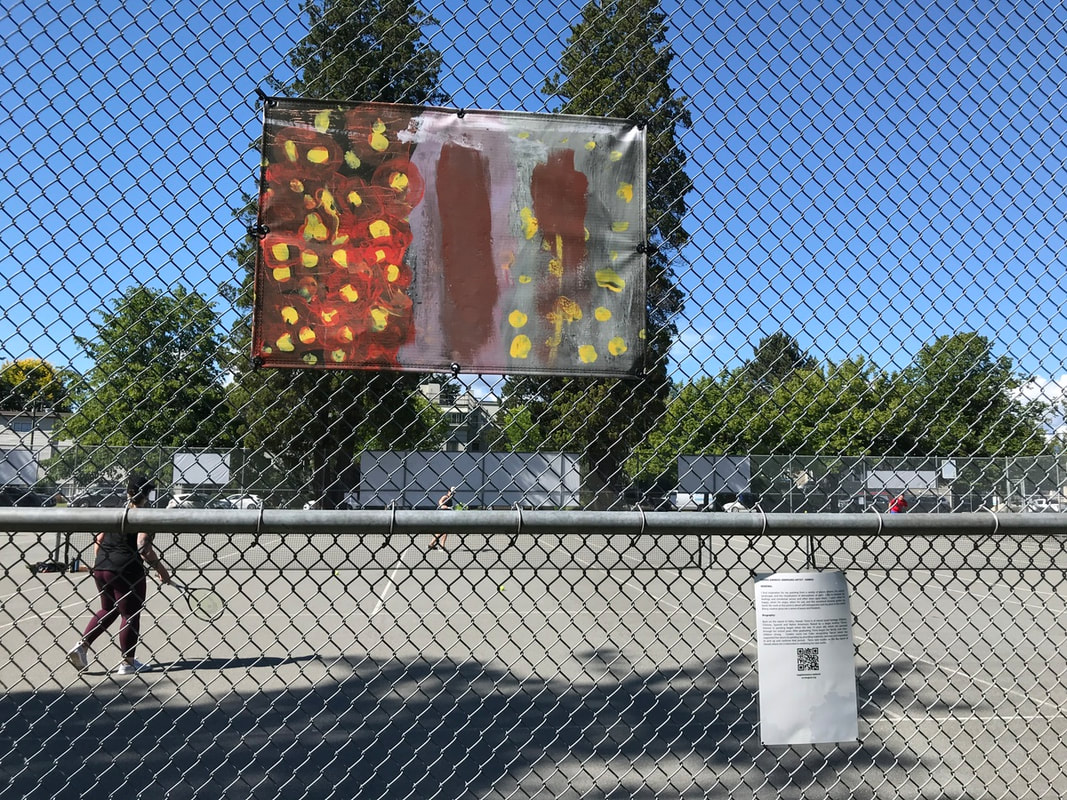 Born on the island of Oahu, Hawaii. Tierra is of mixed raced heritage (Filipino, Chinese, Spanish and Native American). Raised by a single mother, Tierra’s interest in painting began when she was 10 years old.

ZENYASE HUNSBERGER:   EMERGING ARTIST
​MASCARA
"As an artist, I think about the mask that we show to the world and how it is in a constant state of transformation. We transform our inner self into an outward mask that simultaneously protects and exposes us. I am interested in personal growth through art, making pieces that invite the observer think about who they are and all the different components that make up a person." 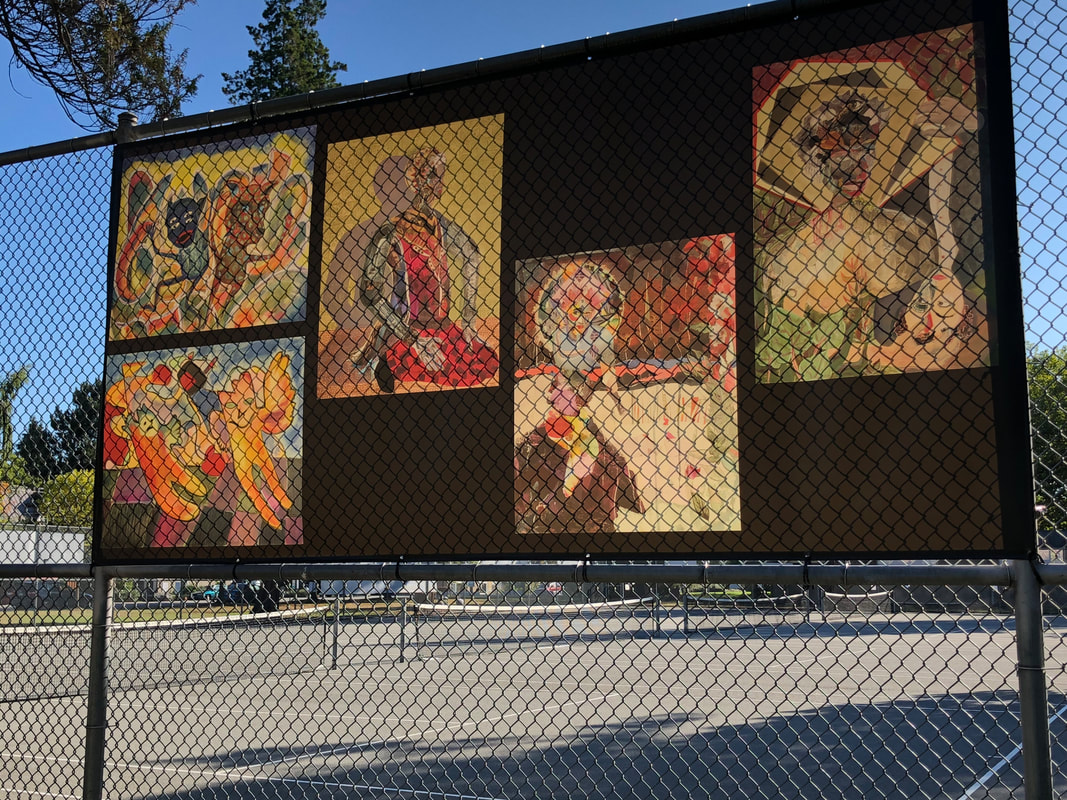 DZenyase Hunsberger was born in Toronto, Ontario and grew up in Puebla, Mexico. A self-taught artist, Hunsberger recently finished her degree in visual arts at Emily Carr University and has a degree in Applied Linguistics from the University of Victoria.  Zenyase exhibited at ARTBEAT 2015, a group show curated by Dr. Lynne Ruchinski.  She appeared alongside prestigious Artists in the exhibition for ARTS UMBRELLA AUCTION - SPLASH GALA VANCOUVER - 2018, 2019, 2020 and most recently was in a group show entitled QUARTZ at SLICE OF LIFE Gallery & Shop, Commercial Drive, Vancouver in February 2021. 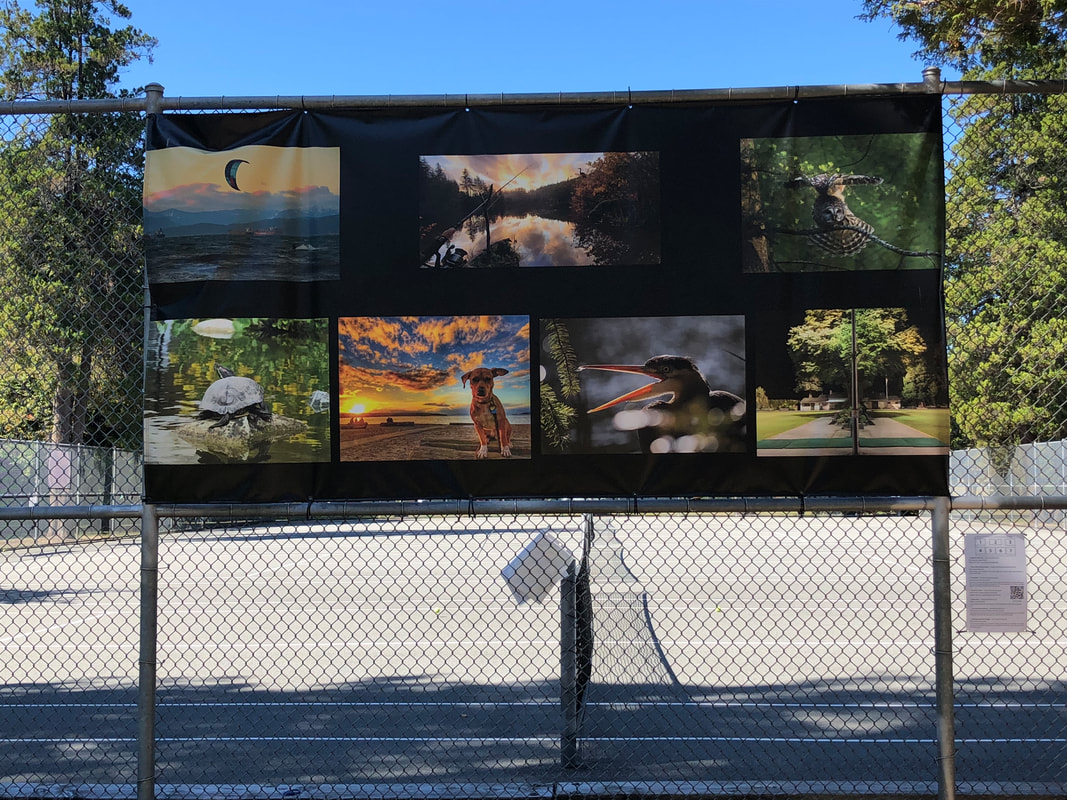 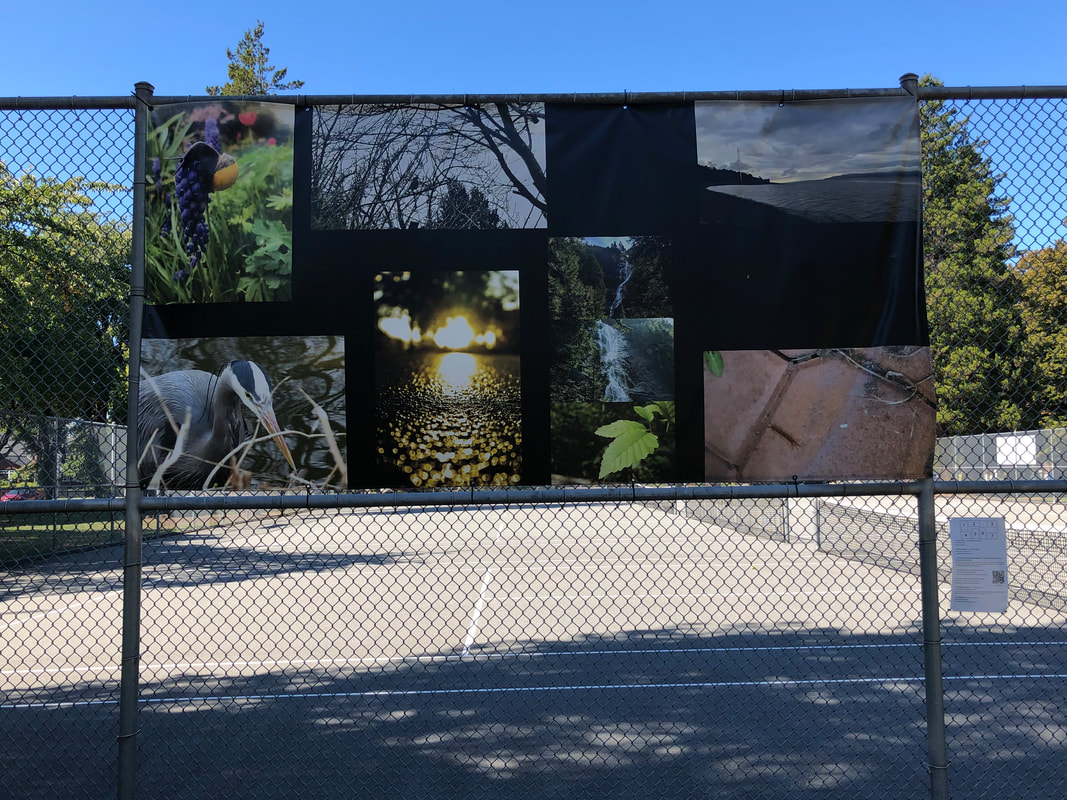 SPECIAL THANKS TO DANITA NOYES
​ VANCOUVER PARK BOARD: DECOLONIZATION, ARTS AND CULTURE